For two months in 2010, Chris Voigt ate nothing but potatoes, 20 potatoes a day, to be exact. When it was over, he was a healthier man.

Chris Voigt made national and international news when, for two whole months, he ate nothing but potatoes.

It’s been eight years since Voigt, the executive director of the Washington State Potato Commission, embarked on his 20-potatoes-a-day diet. From the start of October through November in 2010, Voigt consumed only spuds, a few basic seasonings and small amounts of oil for cooking. His endeavor drew attention from NBC’s Today Show, CBS News, Fox, NPR and the UK’s Daily Telegraph.

Voigt documented his journey through a blog (20potatoesaday.com). Tired of potatoes getting a bad rap as being nothing but fattening starch and carbs, he wanted to make a statement that proved potatoes were very nutritious.

While Voigt wasn’t attempting to create a fad diet and doesn’t recommend anyone trying to survive solely on one food, he did come out a healthier man when the diet was over and he proved his point: potatoes are pretty darn good for you.

Spudman caught up with Voigt to reflect on the diet and how public perception of potatoes is changing.

How often do you still hear about the all-potato diet?

It still kind of pops up. Every month I’ll get some kind of notice that some article ran or there is some blog post talking about it. … It was a fun little experiment we did back then. 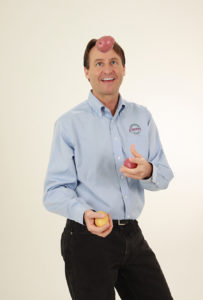 What was the goal?

The whole purpose of that diet was to make a bold statement, to show that there is so much nutrition in potatoes that you could live off them if you had to. Literally, I just ate potatoes and nothing else. There were a few seasonings, but no gravy, no butter, no sour cream, and just little bit of oil for cooking. That was it.

Any surprises along the way?

I was kind of hoping to be alive at the end of the 60 days, but actually I got healthier. I wasn’t trying to lose weight, but I lost 21 pounds even though I was eating 2,200 calories of potatoes a day. My cholesterol went down 67 points, my blood sugar came down and all the other blood chemistry — the iron, the calcium, the protein — all of those either stayed the same or got better. I always said there is no one single food that meets all your nutritional needs, but if you were to pick one, potatoes would be a good one.

Some of the low-carb diet fads that have popped up in recent decades haven’t helped public perception of potatoes being healthy. Do you feel that stigma is wearing off?

There is still a segment of the population — particularly those that want to lose weight, not those that understand nutrition — there is still that misinformation out there. But for those who really know nutrition and understand how their bodies function and the importance of carbohydrates, that’s where potatoes have made a lot of in-roads and it’s really common for those folks to be eating a lot of potatoes.

Can you give us an example?

Most of the people who truly understand nutrition are athletes, and they get it. I sat in on some focus work group that Potatoes USA was doing and it was interesting to have these athletes talk about potatoes. I was really shocked how many of them, especially the endurance athletes — the folks who are doing the long bike rides or the long runs — are literally carrying potatoes with them and eating them on these rides or runs. It was neat to see that.